The jewel in the heart of the Cotswolds

Chipping Campden’s name originates from the Saxon ‘campa’ ‘denu’ is an accurate description as the meaning is literally ‘a valley with cultivated fields ringed by unfenced hill pastures’. The word ‘Chipping’ meaning ‘market’, was not added until much later when the town had a market.

There local evidence of a stone age village in Weston Wood, a Roman grave at at Kingcombe and vineyard on the slopes of Dovers Hill, the Kiftsgate Stone stands on the “moot” site where local tribes met to discuss matters, from Saxon times in St James Church, the butresses on the Town Hall and a small barn in Westington. Little more is known about Campden before the Norman Conquest and the Domesday Book recorded a population of about 300.

The Lord of the Manor, Hugh de Gondeville was granted a market charter by King Henry II in 1185 and set out the plan of the town with the main street following level ground by the River Cam, a curve that helps to make the High Street and its regular plots of land called burgages to be occupied for a fee by craftsmen, traders and others providing services to the community.

The wool trade and its wealthy merchants brought prosperity to Chipping Campden and saw the building of St James Church, The Almhouses, Old Campden House, Greville House, Woolstaplers Hall and the iconic Market Hall, all of which you can still see today.

The fingerboard sign installed on the A44 at Cross Hands by the Izod family demonstrates that right through until the introduction of the railway; Chipping Campden was a critically important junction/resting stop on the road from everywhere to anywhere, particularly between Warwick and Gloster, and Woster and Oxford for several hundred years.

Today’s roadways have removed this vital need and Chipping Campden is now often referred to as “the hidden gem or jewel of the Cotswolds on the road from nowhere to everywhere”.

Chipping Campden has just about everything required of a visitor/holiday destination: 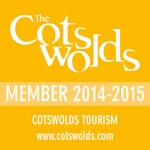