A serious fire in 1929 which destroyed the thatch of the surrounding barns, threatened Stable Cottage and the roof timbers began to smoulder under the red-hot stone slates.

Originally a 14/15th century “farmer’s cottage”, Stable Cottage was thatched with just a doorway, a ladder on the wall to get upstairs and no windows to let light in. It is a real piece of Chipping Campden’s history (there was a very similar cottage at Heavenly Corner just a matter of 70 yards away behind the old cow yard). Despite instructions to the contrary, the original ladder was erroneously removed by the builders in 1979 when the building was converted back into living accommodation.

Chipping Campden’s historic records show that the Haines family were tenant farmers in Westington from well before 1700. The inscription above the courtyard door is PH 1776 – this is some years after the farmhouse was built in about 1730 and the family moved into it. The second date here is 1790 and it is believed that this was when the doorway was widened and heightened to allow cart horses to enter.etc.

Cotswold Charm Holiday Cottages aims to be the best one-stop shop for self-catering accommodation and services in the Cotswolds and Chipping Campden in particular.

For Cotswold Charm, Stable Cottage is an iconic time warp of a historic cottage with the majority of the original stonework and polished oak.

Prior to half of the ground floor being converted into a farm office in about 1950, Michael can remember at least two large cart horses being taken in there for the night and being brought out again in the morning.

It would have held up 8 horses and in the picture of the kitchen, there were obvious signs in the walls of salt licks being placed in the corner behind the table. The stalls and hay racks were still evident on the lounge wall when it was converted into a rest room for the dairy.

In the first picture of the lounge, the wooden ladder was on the wall between the two windows. The oak beams in both the kitchen and the lounge are original features.
The gable end in picture of the cottage from the old rick yard was added in 1999 to provide space for a first floor bathroom. The gable ends in the two bedrooms clearly show the outline of the thatched roof, as do the oak “A” frames inside the doors of both bedrooms.

Above this outline, you can also pick out the key stones on which the current roof timbers rest as well as the additional blocks on the A-frames.

The stone on the inside of the small bedroom window indicates that the window was installed in 1811 by JH. The slot window above was probably also installed at the same time when the cottage’s thatch was replaced by stone slates.

At the same time, the big opening behind the four-poster bed in the larger bedroom is a tallet, through which hay was thrown from an adjacent cart to provide feed the horses during the winter. 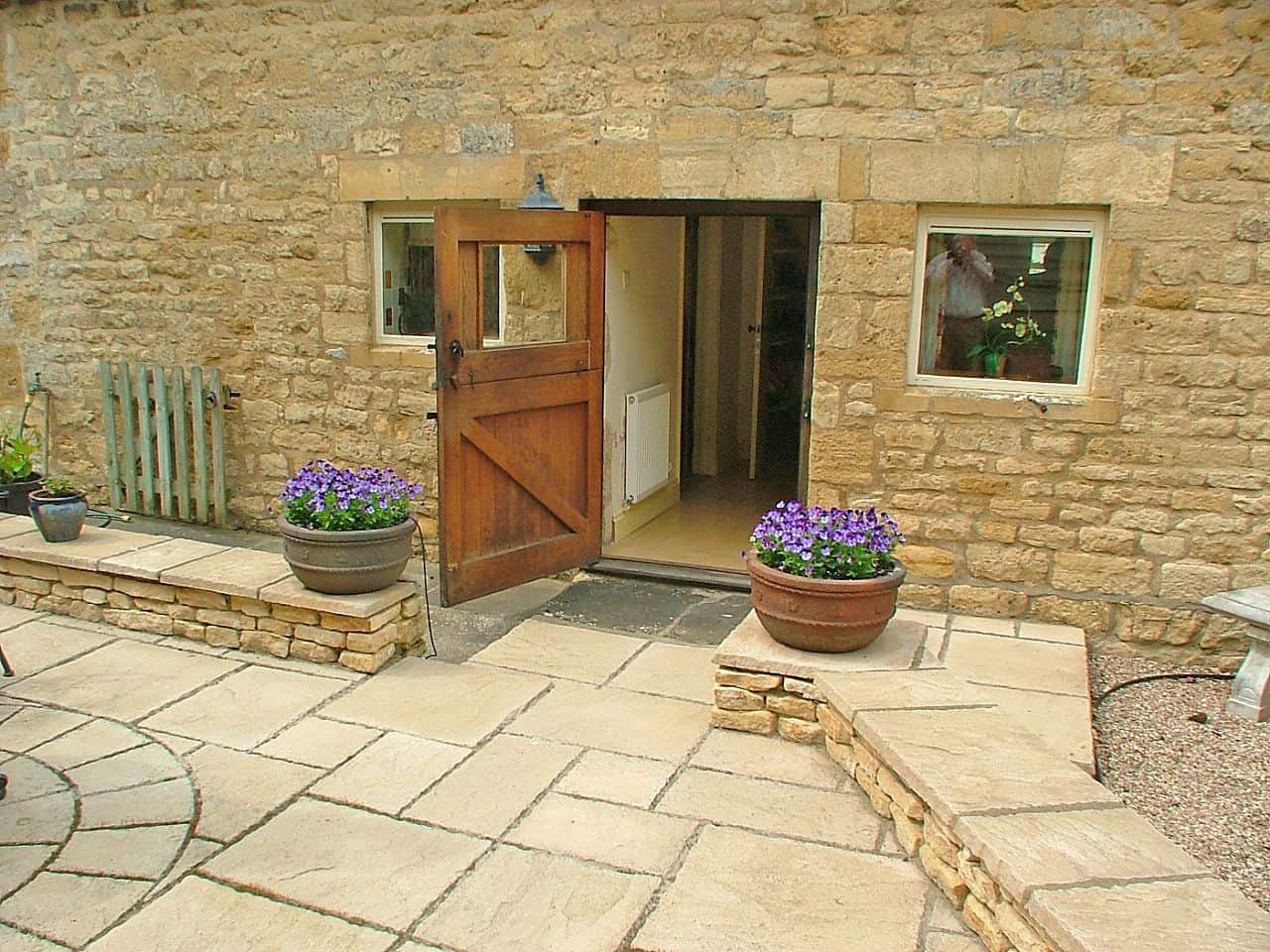 A serious fire in 1929 which destroyed the thatch of the surrounding barns, threatened Stable Cottage and the roof timbers began to smoulder under the red hot stone slates. With no water available from the hydrant, the only liquid available was several hundred gallons of home produced cider. According to our father Horace, rags and towels were soaked in this and then laid on roof timbers to just about prevented them from catching fire.

Back in 1950 when half of the building was converted into a farm office and store room, a doorway was cut into the west wall and a staircase ran up from by the small square window in the kitchen to reach the store room on the first floor. The two bigger windows in what is now kitchen were installed to create a much lighter working office.

Major renovations in about 1965 saw windows opened up on the east wall as it converted into a rest room for the dairy staff and staircase to get to the first floor inserted between the two sides of the building.

With the dairy a thing of the past and the cottage needing a new lease of life, planning permission was obtained in 1999 to convert it back into living accommodation. A north facing gable was added which provided an entrance hall and utility room on the ground floor, a new staircase was also installed and an ensuite bathroom on the first floor.

Cotswold Charm was set up by Michael in 1999 to market Stable Cottage as a holiday let with very good results right through until our mother died in 2009 when it was passed to my sister Margaret. Because of her then workload, she rented it on a short hold basis for a while before deciding that improvements were needed.

This work commenced in September 2018, with the kitchen, lounge, bathrooms, heating and windows all being upgraded to meet today’s requirements and allow it to return to the holiday market for 2020.

For Cotswold Charm, Stable Cottage is an iconic time warp of a historic cottage with the majority of the original stonework and polished oak beams, etc. shown to advantage and yet it has been tastefully modernised to meet the needs of today’s guests.

Today, it offers a truly relaxing and delightful holiday setting/base from which a family or two couples can enjoy the beauty and history of Chipping Campden, the Cotswolds and Stratford upon Avon and Shakespeare country, etc.